The Most Useful Tools for Smart Contract Audit

Audits and audit efficiency remain as important as companies change today. Indeed, an audit is an even more important enabler for our thriving capital markets. It embraces continuous innovation, applies agile auditing, and is focused on methodology and workflows based on risk.

What is a Smart Contract?

A Smart Contract is software incorporating a set of rules to be followed for agreeing with the terms of an agreement, verifying the compliance automatically, and then finally implementing the terms which have been agreed upon. Simply put, it is a self-executing contract that excludes the dependency of a third party while the contract is made between two parties.

Consequently, two parties can directly transact with each other without involving any third-party dependence.

These smart contracts are trustable and distributed. These cannot tamper and no attacker can force any illegal activity.

Auditing a Smart Contract is going thoroughly through the code to avoid any data breach or any kind of bug present in the code. This is necessary because once this code is deployed, the code cannot be changed which can lead to enormous security risks, loss of data, and so on.

The procedure of auditing/testing a Smart Contract:

The process of auditing a code is similar to testing any code. There is a set of steps involved in the testing code.

Truffle is a famous framework. It is a Node.js platform for compiling, linking, and deploying smart contracts. Several features are being provided by Truffle like custom deployment support, scriptable deployment, binary management, access to external packages, and so on.

This framework is written in a user-friendly manner. Users, to be more specific engineers can make a choice for the functionality they need.

To start using the Truffle framework, it must be installed via npm:

Then, to create the project structure, a truffle init command must be made:

A Remix is an online solidity IDE that is easy to use and completely featured by developers to check and compile smart contracts. There is an IDE version, as well as an online edition.

Many of the tools within Remix include a solidity compiler that produces a lot of useful knowledge that can be used in different contexts.

It also features three runtime environments, namely injected Web3 to providers like Mist or MetaMask, Web3 provider to localhost via IPC, and Javascript VM, which is a simulated setting. The code analyzer supports developers in writing some of the best codes.

To analyze the code, SonarSolidity is given to the SonaQube Console as a plugin. It clarifies flaws and glitches and can import Solium files, which can be expanded with Solium’s own plug-ins.

This uses 25 rules that promote the best practices of Solidity and track bugs and problems with code smell.

It is an open-source framework that conducts static smart contract analysis, deploys binary contract analysis, and is used for searching and querying blockchains. The open platform SmartAnvil is built around multiple components to cover the various aspects with a good study with contracts. While SmartAnvil can work in isolation, SmartAnvil communicates with Moose data and analysis tools application.

The below figure shows the key components of SmartAnvil 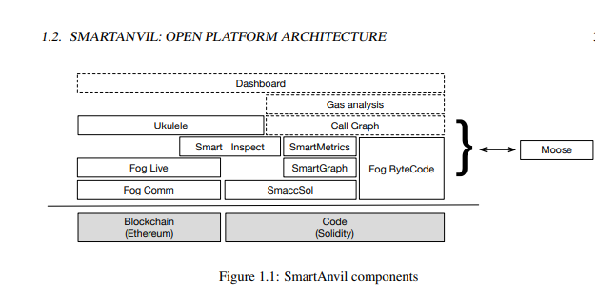 The picture is taken from the Duca18 SmartAnvil research paper

MythX is a cloud-based service that provides extra paying functionality as well as revenue-sharing when the paid subscription option goes live. The subscription model will be based upon a network of the stablecoin. The revenue-sharing model will allow everybody to earn through the development of MythX-fronted tools and integrations. The Truffle MythX plugin which is compliant with Truffle 5.0 or higher is one of the first end-user plugins. It is used in analyzing smart contracts to the Truffle framework.

Karl tests vulnerability code for smart contracts and can be used in real-time to track the Ethereum blockchain for newly deployed insecure smart contracts. By running candidate contracts in a simulated copy of the blockchain it removes false positives.

Install it by entering the following command

Depending on permissions, here is the command to add an unsafe-perm flag

These are some commonly used tools for auditing/deploying smart contracts. Several other 3rd party tools are available in the ecosystem to enhance and optimize the contracts namely Sither, HEVM, Manticore, and many others. We at ImmuneBytes, understand the importance of using an external tool to find the hidden exploits in the contract and our team of auditors only use tools that apply to the Blockchain framework.

Few practices that prove to be best for Smart Contract Audit

Be prepared for failure beforehand

So, keeping in mind the requirements of users as well as the enormous benefits of auditing smart contracts, we at ImmuneBytes inculcate this feature in our service. You should consider reaching out to us if you are in search of an external auditor.

All That You Need To Know About Pausable...

What is a Smart Contract Security Audit?

Will a DEX Audit Set The Table For...

Code Exploits in Rust are Massive in Damages

How long does a Smart Contract Audit take?

Difference Between Manual and Automatic Auditing