Ethereum is an open-source, decentralized platform that is based on blockchain. It lets users build and deploy their applications and smart contracts with minimal fraud, downtime, or third-party interference. Ethereum has been planning to upgrade to “Ethereum 2.0” which is the most awaited upgrade in the crypto world. Initially, it was to get launched in July 2020, but it has been postponed.

Ethereum has been the second-largest cryptocurrency in one time. But it posed some delay when the number of transactions increased, some security issues emerged, so it has been thought to bring its upgrade with better features.

The cryptocurrency industry has never seen a blockchain of the same size and value as Ethereum attempts to transition users and assets to an entirely new decentral network while maintaining all operations active and functioning on the old network. 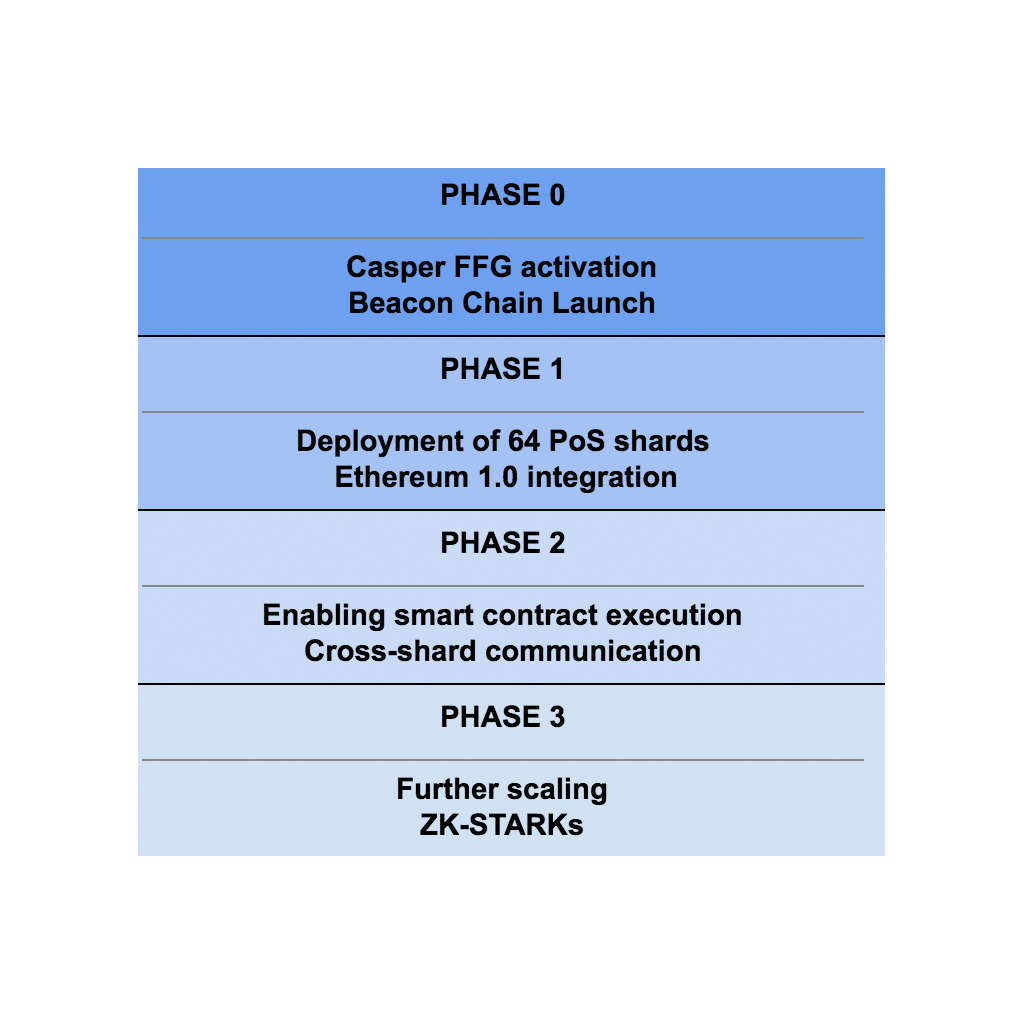 PHASE 0 Ethereum 2.0 is going to be an upgrade on certain features of  Ethereum which will open possibilities of various innovations. Foremost transition in Ethereum 2.0 is from Proof of Work -> Proof of Stake. POS type of consensus algorithm which helps blockchain networks in deciding which transactions are to be allowed and which are to be disapproved. This explores the system’s safe operation and the creation of new coins. Phase 0 will provide a solution to Ethereum 2.0’s Scalability issues.

PHASE 3 which is the final touches to the network. This could mean adding more shards to the network or new cryptographic technology such as Zero-Knowledge Scalable Transparent Arguments of Knowledge (ZK-STARKs)

Increasing Market/User Activity and benefits to them

Users can become staking agents by moving 32 ETH to a contract when Ethereum 2.0 will launch as mentioned by Asian times in the article. Staking 32 ETH would result in roughly 4.6 percent to 10.3 percent in bonuses, as Collin Myers, the head of global product management at blockchain company ConsenSys, allegedly said. The rewards staking agents can earn 32 ETH, worth approximately $6,500 in the press, which have led to a noticeably rising demand for ETH in recent months. The improvements incorporated in Ethereum 2.0 will let users develop dapps on the network with lower fees and with less congestion.

It is the testnet which was launched on August 4th 2020 before mainnet launch. Medalla replicated the Ethereum 2.0 mainnet as closely as possible. Motive was to check for bugs or vulnerabilities(if any) before main launch. The launch proved to be successful but imperfect. The start was slow as the developers team was able to find some peering bugs. Also, some bugs were there with the launchpad and in the network too. The bugs were so severe that testnet was brought to a halt on August 14th 2020. The participation in testnet was about 57%-60% only.

Further they added, “We believe the expected launch target of 2 to 3 months from Medalla genesis is still an ideal timeline. There will be a public checklist of requirements for an ETH2 launch, and this Medalla incident will definitely add a lot of new items to the list regarding client resilience, security, and proper release.”

Though developers have been doing experimentation and research on Ethereum 2.0 for almost 5 years, the improvements have been critical to the success of Ethereum 2.0. Different phases posed different challenges while launching but the efforts are worth the benefits. Its unique design will let investors and traders have experience in the creation of digitally new assets.