Is SHIBA a Classic Pump and Dump? And the Relevance of Low Transaction Fee

So it turns out that the crypto market hasn’t gotten tired of canine-themed meme coins just yet.

Self-claimed “DOGE killer” Shiba Inu (SHIB) has pumped by nearly 170% in the last seven days and 825% in the last 30 days, pushing the token to the No. 8 most valued cryptocurrency by market capitalization, according to data compiled by CoinGecko.

What is the reason behind this and is SHIBA the classic pump and dump scheme? Let’s discuss! Also, we will be talking about the relevance of low transaction fees at the end so keep on reading.

Shiba Inu, created in August 2020 by Ryoshi, is a joke coin or meme coin which was launched as a rival to Dogecoin.

Shiba Inu has been in the news for two reasons. Recently, Tesla founder Elon Musk tweeted stating he would like to own a Shiba pup which excited the crypto market and the prices rose by massive percentages.

Shiba Inu tokens are powered by Ethereum. Fungible tokens like Shiba Inu are ERC-20 tokens and non-fungible tokens (NFTs) use the ERC-721 token standard of the Ethereum platform.

SHIB token is our first token and allows users to hold billions or even trillions of them, the official website mentions. More additions are coming up as per Shiba Inu’s website. The creators plan to launch Bone Dogecoin Killer, the next coin in the future.

Why is Shiba Inu going up?

The crypto market is a very volatile and unpredictable one, and often cryptocurrencies that have no reason for being on top often get pumped up, and sometimes the reason is Elon Musk.

Shiba Inu coin was recently listed on Coinbase for the first time in mid-September, with its price increasing by 34% after it was listed on the giant crypto exchange on 16 September.

It has since experienced several bullish runs from crypto investors and traders who hope to see the meme cryptocurrency listed on stock trading and investment platform Robinhood.

The coin has been pumped this time after a tweet from Tesla CEO and Dogecoin investor Elon Musk. The price of Shiba Inu had earlier skyrocketed in a very short period after Musk shared a picture of his new pet dog named ‘Floki’. On Oct 4th, Musk tweeted yet another image of the pup with the caption ‘Floki Frunkpuppy’ which caused a sudden surge in the token’s prices. 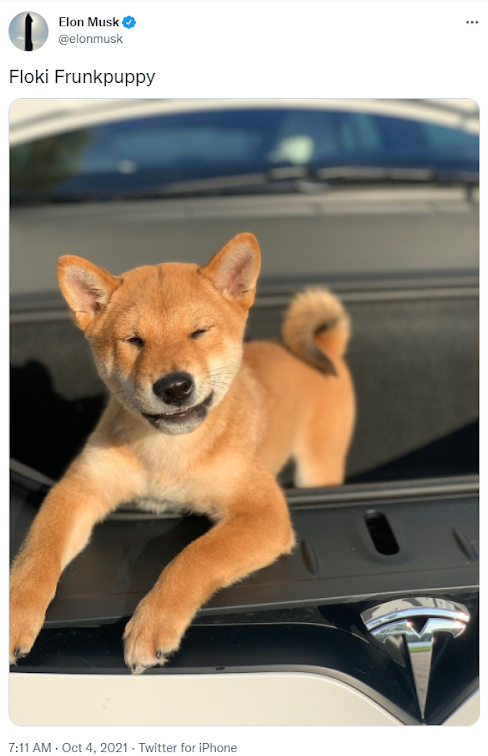 But that’s not it. There’s more!

Is Shiba Inu a pump-and-dump coin?

After a significant price rise in a few weeks, many people are questioning if Shiba Inu is a social media-driven pump-and-dump scheme.

A pump and dump is a manipulative scheme of someone promoting a stock that they own and then selling it after the stock price has risen due to a surge in demand.

In the case of Shiba Inu, it can’t be said for certain. However, what is certain is that its use cases are expanding, and it’s attempting to shed its meme status.

Data from blockchain data firm Santiment shows that the number of SHIB transactions worth more than $1 million has been going up dramatically along with the price rally. A wallet-tracking Twitter account also captured a whale purchase of more than 6 trillion SHIB on Sept. 30, just a few days ahead of the skyrocketing price move.

Notably, the increased whale purchases of SHIB also came after India’s Crypto Covid Relief announced on Sept. 23 that the conversion of 50 trillion SHIB tokens – donated by Ethereum co-founder Vitalik Buterin – into USDC stablecoins has come to an end.

While the whale moves on SHIB may give a glimpse of how the pump may have been triggered, the high amount of whale transactions may not be the best news for SHIBArmy because according to Santiment, it often coincides with a local price top.

Let’s see where this is headed!

Shiba Inu price prediction: What do the experts think?

The meme cryptocurrency reached a record high of $0.000077 last Friday but has now dropped to $0.000045. The fall has been put down to a whale moving $2.3 billion worth of the coin from their crypto wallet.

Marie Tatibouet, chief marketing officer of crypto exchange Gate.io, told The Sun she expects the Shiba excitement to flatten somewhat. “I do see some correction coming in the near term as the hype dies down a bit,” she said.

However, Jordan McCreery, founding partner of Ingrained Media, is far more bullish. “I believe Shiba has some real potential to grow from its fraction of a cent amount to $0.01 or greater,” he said last week.

Don Guo, CEO of fintech firm Broctagon, said it is impossible for Shiba Inu to ever reach the heights of $1. “In order for SHIB to reach a dollar, it requires a market capitalization of one quadrillion US dollars,” he told The Express.

“In comparison, the entirety of the US National Debt is $23.3 trillion – and even that staggering sum constitutes less than 3% of the amount required for SHIB to reach that price point. Given current trends, it is more likely that Shiba will remain within its ballpark of less than a fraction of a cent.”

All crypto investments are risky, but meme coins like Shiba Inu are particularly volatile, and you should be prepared to lose everything you invest.

Moving on to the topic of low transaction fees and their relevance to crypto!

The story of transaction charges

Transaction fees of cryptocurrency exchanges have been a mess. The situation has improved in recent times but not so much. So, why do we want low transaction charges?

Here are the different transaction costs levied by crypto exchanges.

After so many different charges are levied, the total fee is bound to come out a lot!

The relevance of lower transaction fees

One of the biggest challenges faced by NFTs today is high fees. To speed up the NFT market, we need low fees and while this market has made some people millionaires, the high fees for minting, buying, and selling mean that many artists and NFT issuers can easily lose money.

Keeping a wider picture in mind, lower transaction fees will eventually make cryptocurrencies stronger and push their worldwide adoption higher. Naturally, with lower fees, users will be more attracted and compelled to transact in crypto.

Intending to charge lower transaction fees, many companies are also switching from PoW to PoS and other consensus blockchains which in turn is excellent for the environment.

Cryptocurrencies with the lowest transaction fees

To make things easier, here’s a list of the top 10 cryptocurrencies that offer the lowest transaction fees in the lot.

We have been seeing platforms come up with innovative solutions to minimize the transaction costs such as Nano, Monero, and many more. This will not only contribute to the growth of the crypto-economy but also promote the concept of green crypto.

ImmuneBytes is a Blockchain audit firm that employs the industry’s best tools and practices to provide comprehensive smart contract security audits. We have a team of robust and experienced security professionals who are adept at their niches and provide you with quality service. We have worked on 175+ projects spread across the world on different Blockchain frameworks with some of the industry’s top firms and we continue to unfold the decentralized movement.