Cardano’s ‘Alonzo Hard Fork’: Everything You Need to Know About the Upgrade

If you are new in the crypto world, you might be more aware of Bitcoin and Ethereum than you are of Cardano. However, analysts and experts describe Cardano to have great potential as its native token ADA recently became the third-largest cryptocurrency in the world with a market cap estimated to be around $80 billion.

Cardano was invented in 2015 but it has been on an upward trend for a few months with prices doubling from $1.2 in July to $2.4 at the time of writing this. According to experts, Cardano’s price may even reach $8 in the coming months.

And now, it looks like Cardano’s dream run will continue to hold, given that it is on the anvil of a major upgrade in the form of the ‘Alonzo hard fork‘.

So, what does the software upgrade offer? We’re here to tell you all about it. Keep reading to find out.

What is the Alonzo Hard fork?

Cardano’s Alonzo update brings the network much closer to its full capabilities.

The Alonzo hard fork is a major upgrade on the Cardano network that sees the much-anticipated implementation of smart contract functionality. Smart contracts are pieces of computer code that automatically execute when certain predefined conditions are met.

The official website of Cardano says, “With the integration of smart contracts, the Goguen era represents a big step forward in capability for the Cardano network.”

After the Alonzo update, anyone will be able to create and deploy their own smart contracts on the Cardano blockchain, paving the way for native decentralized applications.

The system update, which rolled out on September 12, signifies the end of the Shelley era of Cardano and the beginning of the Goguen phase. Although there is no set date for the end of the Alonzo hard fork, developers all across the network have been working hard on testnets and have stuck to a defined road map with specific milestones in the form of “eras.”

Recommend Read: What is a Smart Contract Security  Audit?

The Eras of Cardano

Cardano’s development roadmap is categorized into six main stages, or “eras,” each focused on expanding the functionality of the network. 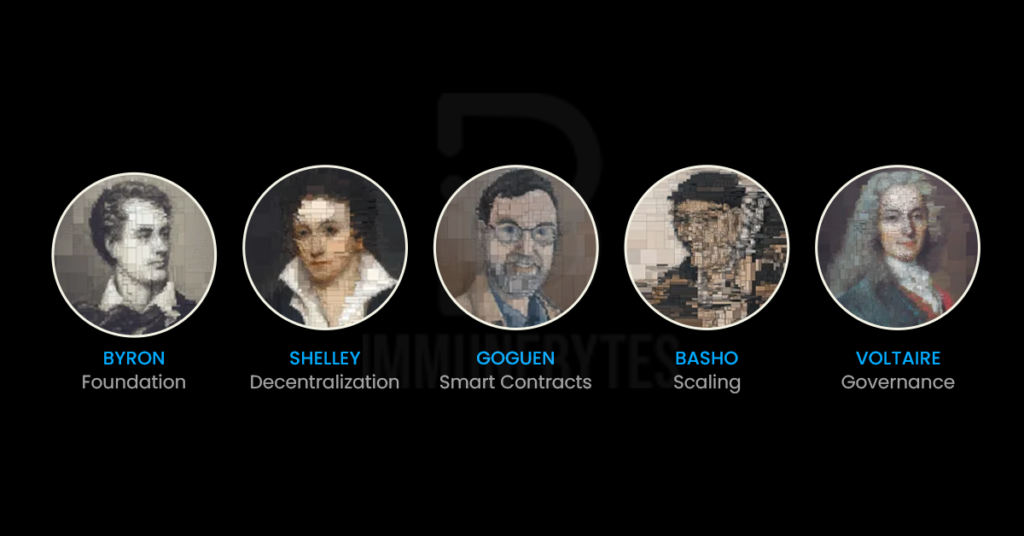 Cardano has now stepped into its smart contract focussed Goguen era. This era will usher in a bigger technical capability for developers to create DApps that can provide more functionality to the chain, including the implementation of its multi-asset blockchain plan.

Moreover, the Goguen implementation provides wider interoperability with other existing smart contracts, regardless of the difference in coding language used to develop them.

The Stages of Alonzo

There are also two smaller phases post-Alonzo Purple dubbed “Alonzo Red” and “Alonzo Black.” Each phase essentially adds more users to the testnet and identifies bugs that may need to be fixed.

Then comes the final Alonzo Red/Alonzo Black color phases, which are reserved for final bug fixes/cleanup to prepare for the final release of the hard fork. Any future tweaks to the hard fork will be very difficult to make past this point, so these two phases must be looked at very carefully.

Moving on to the next new thing!

What is the Plutus Platform?

Cardano’s Alonzo hard fork will bring its smart contract capability Plutus to the network and provides the foundation for more decentralized applications to be built on the platform.

Hoskinson, who’s now the CEO of IOG, explained Haskell was chosen because it is a high-assurance code i.e., it is capable of providing a higher degree of certainty the code works as intended.

The price of Cardano’s ADA token shot up following the hard fork of the blockchain platform’s testnet on Wednesday.

ADA hit $3.09 on Wednesday morning — up about 4% on the last day and 124% from 30 days ago. The coin is the third-largest cryptocurrency by market capitalization at about $94 billion, behind only bitcoin and Ether, and ahead of Binance Coin.

Cardano saw inflows of $10.1 million last week, according to a CoinShares report. It was the largest total on record for Cardano, bringing its market share to 0.15%.

This upgrade pitches Cardano against the Ethereum blockchain, which is considered to be its biggest competitor. With easier smart contract production and more development on Cardano, one can imagine the potential projects to be built.

Projects that demand faster transaction speeds will benefit greatly from the low transaction costs on Cardano. The emergence of easier dapp buildings will bring with it more projects. Already, more than 65 projects are pledged to be released alongside Alonzo, including Synthesis, Miniswap, Stasis, and CardWallet.

The future for Cardano looks promising and could definitely shake things up in the blockchain community. It is a next-generation blockchain and rightfully so, it is also proving to be one!

ImmuneBytes is facilitating blockchain security audits by employing the use of cutting-edge techniques on smart contracts and decentralized applications. We have a team of experienced security professionals who are adept at their niches and provide you with innovative solutions and consultation. So far we have worked on 175+ blockchain start-ups on different blockchain frameworks, with clients spread across the globe, and are continually unfolding ourselves to make this decentralized movement thrive.