In the crypto world, tokens are crucial. Most communities and projects have their own token and many times these tokens are required to use their own protocol. If you don’t already hold that token, you must go to an exchange and exchange your token for the required token–a cumbersome step.

This is where Kyber Network steps in. The project wants to enable any token holder to easily swap one token for another incurring minimal fuss.

What is the Kyber Network?

At its core, Kyber is a decentralized way to exchange ETH and different ERC20 tokens instantly–no waiting and no registration needed.

Kyber employs a diverse set of liquidity pools or pools of different crypto assets called “reserves” that any project can tap into or integrate with. At the time of writing, Kyber Network is integrated with more than 100 applications, and powers KyberSwap, Kyber Network’s DEX.

All this swapping happens directly on the Ethereum blockchain, meaning every transaction is completely transparent.

Kyber was designed with a mission to integrate with other protocols so they’ve focused on being developer-friendly since the beginning by providing architecture to allow anyone to incorporate the technology onto any smart-contract-powered blockchain.

The Kyber Protocol aims at presenting a simple solution for developers; it does not require them to build a complex system and worry about maintaining smart contract security upgrades. As a result, hundreds of developers are turning to Kyber Network for all of their in-app trading features.

What are Kyber’s‘ Reserves’?

Reserves are essentially smart contracts with a pool of funds.

All reserves are controlled by different parties with different prices and levels of funding. Instead of using order books to match buyers and sellers to return the best price, the Kyber protocol looks at all the reserves and returns the best price among the different reserves.

Reserves make money on the “spread” or differences between the buying and selling prices.

How Does Kyber Network Work?

Kyber Network consists of a set of smart contracts that can be implemented on any smart contract-capable blockchain. The protocol aggregates liquidity from a variety of reserves, including token holders, market makers, and decentralized exchanges, into a single liquidity pool on its network.

Now let’s imagine that you want to trade BAT for DAI. In this case, since you are not trading directly in ETH, some additional steps are required:

Both the above-described trades are completed in a single blockchain transaction. Likewise, with Kyber Network, all trades are instantly settled on the blockchain and are either executed in full or reverted.

When integrated into dApps, DeFi platforms, and crypto-wallets, the Kyber Network has a wide range of use cases. Let’s move on to those.

Kyber’s instant swapping tokens make it capable of many use cases out of which we’ve listed the most important ones below:

The native token of Kyber is called Kyber Network Crystals (KNC). Holders of KNC can participate in the governance of the Kyber Network through KyberDAO.

By staking their tokens, KNC holders can:

KNC is a deflationary staking token, which means its supply will decrease over time.

How can I get a hold of KNC?

Kyber Swap can be used to buy ETH directly using a credit card, which can then be used to swap for KNC. Besides Kyber itself, exchanges such as Binance, Huobi, and OKex trade KNC.

What is the KyberDAO?

In July 2020, Kyber Network launched the Katalyst network upgrade and introduced the KyberDAO, a Decentralized Autonomous Organization that allows KNC holders to participate in the governance of Kyber Network. 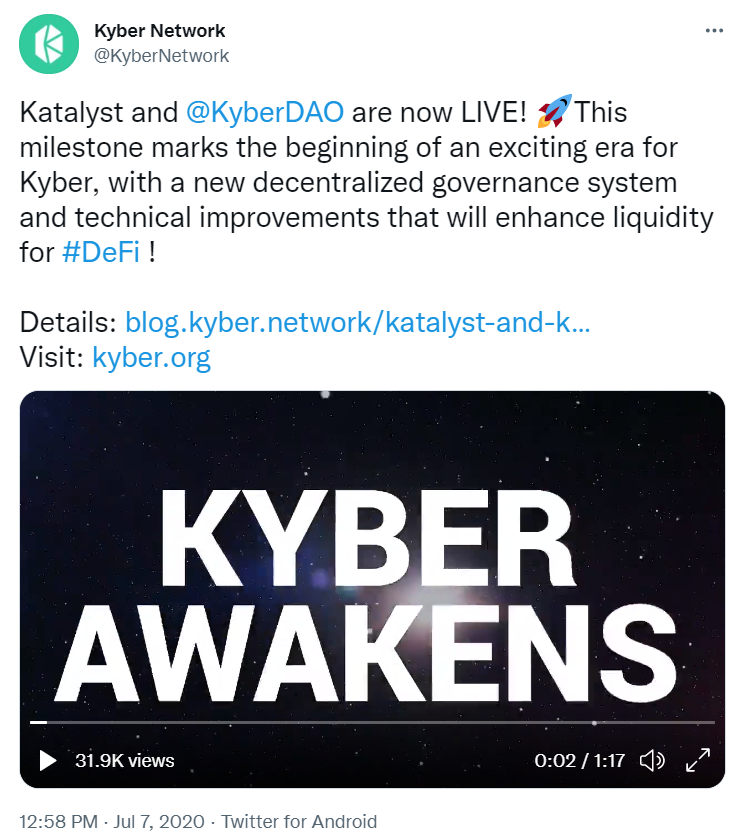 KNC holders can stake their tokens to the KyberDAO, which will allow them to vote on various proposals that concern the development and operation of the Kyber Network.

Stakers only receive full staking rewards if they vote on all the proposals during each epoch — each of which lasts around two weeks. KNC stakers can currently expect an annual reward of ~12.79%, but this can vary based on the trading volume of the network.

Kyber has rolled out its KyberDMM protocol on Binance Smart Chain (BSC).

KyberDMM is already available in beta on Ethereum and Polygon, with the all-time trading volume and total value locked on the platform exceeding $1 billion and $500 million, respectively.

With the integration with BSC, Kyber Network now seeks to widen DeFi adoption across different networks and provide more flexibility and capital efficiency for liquidity providers.

“Kyber is trying to be a new multi-chain frontier that facilitates efficient trading in the DeFi ecosystem,” Loi Luu.

A step into Yield Farming

To support KyberDMM’s launch on BSC, Kyber is introducing a liquidity mining campaign that will see 2 million KNC, which is roughly $4 million in KNC, distributed across BSC’s four liquidity mining pools over the next two months.

The Future of Kyber Network

The goal of Kyber in the coming years is to solidify its position as a one-stop solution for powering liquidity and token swapping on Ethereum.

Due to concerns about high Ethereum gas prices, Kyber Network is currently looking at different layer-2 protocols to work with, to help make the platform cheaper and more efficient to use.

The network also plans to reduce gas fees using a technique known as reserve routing and is pursuing a permissionless token listing structure. With the level of innovative technology that Kyber uses and its user-friendly approach, the network has great potential and has a strong root in the decentralized finance community.

ImmuneBytes is facilitating blockchain security audit services by employing the use of cutting-edge techniques on smart contracts and decentralized applications. We have a team of experienced security professionals who are adept at their niches and provide you with innovative solutions and consultation. So far we have worked on 175+ blockchain start-ups on different blockchain frameworks, with clients spread across the globe, and are continually unfolding ourselves to make this decentralized movement thrive.

An Introduction to Qilin Protocol: the First of...

An Introduction to Yield Farming: the Fuel Powering...

DeFi, a Safer Alternative to Traditional Finance: How?

A roadmap to DeFi Security Audits